Barfatan, a term called in Iran as a sort of semi-transparent antique, stained glass and crockery. Regarding the origin of appearance and how widespread the term is applied to the Qajar period, cannot be considered definitive.
The semi-transparent glass with iridescent glitter, due crystalline structure scatter light and make it turbid, and apparently it was called Opal, Opaline, due to Similarities with the Old Stone Opal. Unlike other glasses that transparency is favorable in them, various species of opaque Barfatan, with colors of milky, light blue, light green, yellow and pink is more desirable.
Manufacturing Opaline glass was established in Europe in nineteen century, this name was uesd in baccarat glass shop in France for the first time and became widespread in other French shops (1825-1870) and in America and England at the first decades of twentieth century at first, vases, pitchers, and delicate containers were made of this glass but due to rising demand, these objects painted with gilt and enamel designs and were ornamented with cool painting and glass strings.
In The late nineteenth century, when European glass products were introduced to eastern markets, royal and the rich eastern families ordered variety of dishes to factories in Europe, instead of the usual decorations in Europe, designs of flowers, bushes ,plants ,foliage, eastern landscapes and cities and images of old and new kings were used. A variety of dishes on the different occasions and from foreign politicians and courtiers, and others were presented to kings, were collected in the Ottoman court .Collection of such containers, whether for luxury or for use, was in the spread between the aristocratic families and became the bride items. Thus, sets of Opaline dishes in many homes of the wealthy eastern families became collected and remained as legacy.
In Persia, the Qajar era, this type of glass and crockery was called Barfatan. Khusru Mirza Qajar in a trip to convey his sadness regarding incident in which Grybaydvf was murdered in (1829/1244) he visited the factory Barfatan, describing about it. His description suggests that they made crockeries in that factory which runs by French artisans and was new to Russia.
However, Mirza Fattah Khan Garmroudy that during Mohammad Shah Qajar along with Hussein Khan M.Ajudanbashi went to Europe for a political mission, he noted in his itinerary variety of bubbles and Barfatan dishes. At that time, no more than twenty years from the starting of construction of Opaline glass had passed. So, probably in Iran, the form of crockery was called Barfatan firstly and later the name extended to the thick and opaque glass and the designed glass which were undesirable French and Russian made Opaline.
In the Qajar period, painting of half body picture of Kings of Shah (especially the portraits Naser-e-din Shah, and the lion and the sun on Barfatan and other objects on the glass was readily available. Mohammad Hassan Khan Etemad o al- ssltaneh mentioned it as one of the major activities, bright evening of that era. This method of decorating glass craft is still common in glass shops. Common kinds of dishes and utensils that are made from Barfatan are bubbles lights and lanterns hangings known as Letter (appear to be distorted word Lantern in French or Lantern in English) and Rosewater sprinkler and smoke Bottle and Teapot. 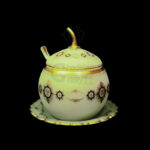 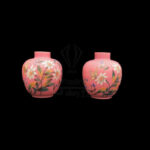 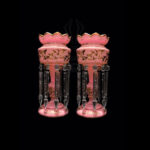 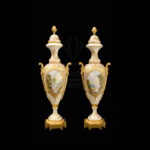 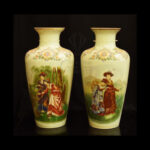 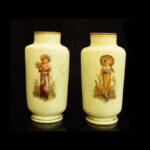 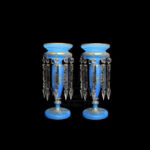 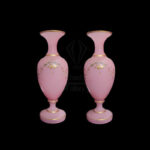 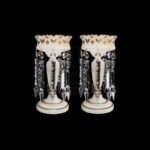 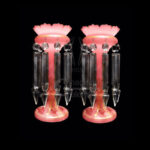 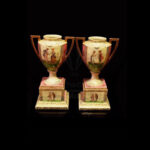 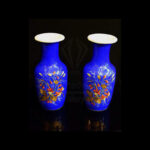 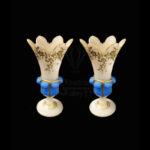 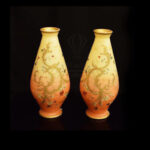 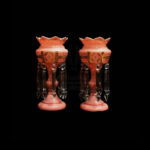 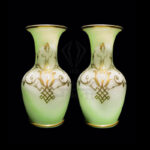 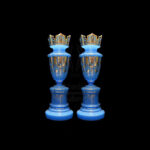